In the case of the ocean circulation, i.e., the currents and eddies that transport marine tracers floating around in sea water, the transport operator can be represented by

In the case of sinking particles, one can assume that they are only transported downwards with some terminal settling velocity $\boldsymbol{w}(\boldsymbol{r}).$ The corresponding transport operator is then simply

In order to represent a marine tracer on a computer one needs to discretize the 3D ocean into a discrete grid, i.e., a grid with a finite number of boxes. One can go a long way towards understanding what a tracer transport operator is by playing with a simple model with only a few boxes, which is the goal of this piece of documentation.

The simple box model we consider is embedded in a 2×2×2 "shoebox". It has 5 wet boxes and 3 dry boxes, as illustrated below: 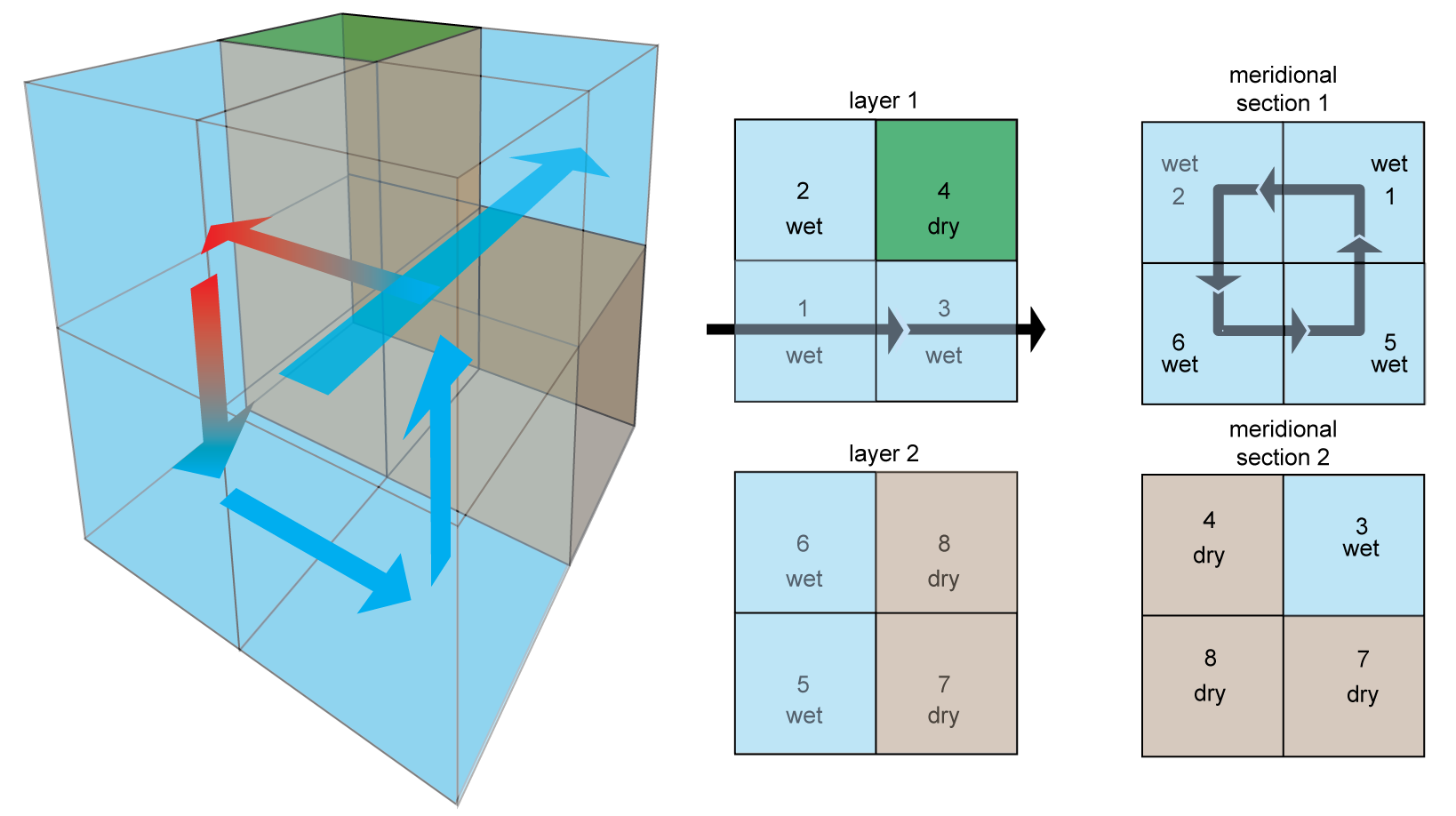 An example of discretized advection, $\boldsymbol{u}$, is shown on the image above, and consists of

This circulation is available as the Primeau_2x2x2 model. You can load it in AIBECS via

In AIBECS, tracers are represented by column vectors. That is, the 3D tracer field, $x(\boldsymbol{r})$, is vectorized, in the sense that the concentrations in each box are rearranged into a column vector.

The continuous transport operator $\mathcal{T}$ can then be represented by a matrix, denoted by $\mathbf{T}$, and sometimes called the transport matrix. It turns out that in most cases, this matrix is sparse.

A sparse matrix behaves the same way as a regular matrix. The only difference is that in a sparse matrix the majority of the entries are zeros. These zeros are not stored explicitly to save computer memory making it possible to deal with fairly high resolution ocean models.

Mathematically, the discretization and vectorization convert an expression with partial derivatives into a matrix vector product. In summary, for the ocean circulation, we do the following conversion

In AIBECS, there are currently a few available circulations that you can directly load with the AIBECS:

To load any of these, you just need to do

where Circulation is one of the circulations listed above.

If you are adventurous, you can create your own circulations. AIBECS provides some tools for this. (This is how the Primeau_2x2x2 and Archer_etal_2000 circulations were created.)

This document was generated with Documenter.jl on Saturday 15 February 2020. Using Julia version 1.3.1.